Who Is Mrs. Claus?

While at an office Christmas party, we were all discussing family traditions for the holidays. After sharing our favorite and quirky traditions, I felt compelled to ask this question. What is Santa's wife's name? Someone quickly said "Mrs. Claus". I wasn't buying that one. I had to find the truth. 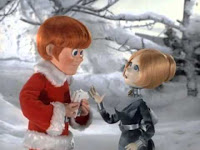 In the 1970 TV special Santa Claus Is Comin' To Town directors Rankin and Bass weaved this story. In Sombertown, Kris Kringle meets a school teacher named Jessica. Kris has to change his name to Santa and ends up marrying her. They also claim her middle name is Mary....

Digging deeper, a self proclaimed historian chronicled this account. In 1864, a beautiful servant girl named Adele was adopted by the von Hoerrneman's a Baltic-Prussian family. This family was well known as Spielzeugherstellers also known as toy makers. According to this source, Adele became Santa's wife.

I was not believing either of those stories. And then I found this next one. Not really a story but more of a historical account.

It revolves around Katherine Lee Bates [1859-1929], an American poet, writer, and educator. She is best remembered as writing the words to "America The Beautiful". As a poet, she is known for the "long" poem "Goody Santa Claus On A Sleigh Ride" [1889]. She is credited with the notion that Santa had a wife. The poem is written from Mrs. Claus point of view.

Prior to the 1820's there was no Santa Claus, only a non-secular Bishop St. Nicholas who brought the gifts to all the boys and girls. It was later that St. Nick made the transition to a secular Santa. And behind every jolly man is a good wife. Bates never gives her a name but this is a poem about equality between men and women.

Goody Santa Claus depicts Mrs. Claus as wanting to accompany Santa on his Christmas Eve trip to deliver his toys to all the girls and boys -- not a stay-at-home wife. Instead, Santa's wife takes a feminist stance, demanding credit for her hard work in making Christmas possible including cooking to make Santa plump.

Goody Santa Claus On A Sleigh Ride is a good read and should be included in your Christmas Eve repertoire. Although it does not settle the dispute of Mrs. Claus first name, it does give her a historical benchmark.