A Thief In The Night 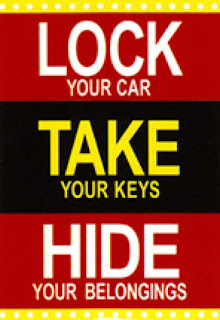 A couple of nights ago 4 cars were entered in the middle of the night. Thieves were looking for cash. In one instance the thief was scared away when the owner of the vehicle hollered at the thief after hearing noises then saw his dome light come on. Nothing was missing from his vehicle.


The next morning the man alerted his neighbor that she should check her vehicle. She had locked her car as she does every night and hung her keys on a hook just inside her house.  She was surprised to find that her car was unlocked, the keys laying on the driver seat and then she noticed that her wallet was missing. Evidently the thief knew where she hung her keys inside her house. She reported this to the police and told them her wallet contained a considerable amount of cash.  Her wallet was located later that day at the village park.  The cash was gone but all the other contents were returned.


Later that day, I talked to a husband and wife. The husband told me that his wallet was taken from his vehicle sometime the night before. He also told me that he had other valuables in his vehicle but the thieves did not take any of them. His wife mentioned that the contents of her vehicle felt out of place. They admitted that both of their vehicles are never locked.

Advice from the Local Police: Lock your cars and keep the keys in your locked house. The PD also advised residents to lock their house even if you are just going to be gone for a few minutes.
Posted by jim cummings at 4:25 PM