A Village registered Democrat needs to step up and call the Caucus. There will be no need for a Town Caucus this year. The Republicans have another year to run amok.

The Village has 2 open Trustee Seats for a 2 year term. The last day to file Caucus Nominations with the B.O.E. is September 20th. Notice of Caucus has to be advertised and submitted to the B.O.E. 10 days prior to the date of the Caucus which should be held before September 20th. All documents from the caucus have to be time stamped prior to 5 pm on September 20th.

If you do not know, I resigned as Chairman in June! I resigned because someone else wanted to take it over via  coup d'état. So I told Dean Erck, since you wanted it, now it is yours. I have no idea where he is, so if you see him, tell him to put all his rhetoric away and call the Caucus.

No sweat off of my brow if we have a caucus or not.... 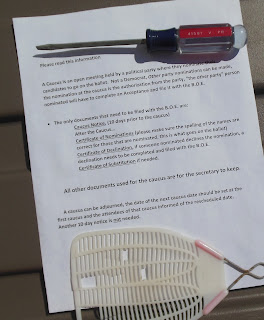