Julius Caesar was warned to beware of the Ides Of March.  He ignored this advice and subsequently was assassinated.  To this day, some view March 15th as a day to be wary.


And so the story goes for a local couple Steve and Jean Side. Jean told me that they were aware of the significance of this ominous historical date. When the phone rang at the Side's residence on the afternoon of the 15th, Jean noticed that the caller ID showed an unregistered phone number and hesitantly answered the call. A woman at the other end said "good afternoon, this is Susie from CBS Interactive." Suzie continued by asking 3 questions: "Are you over the age of 18, do you live in the 50 United States, and do you or your family work for CBS or any of its affiliates?” Jean answered yes, yes, and no to each of the questions.

At this point Jean's husband, Steve is looking at her rather quizzically.  Suzie continues by saying "Congratulations... you have just won Player of the Week for week 12 of last season’s Survivor!”  Jean admitted that her mind was screaming SCAM, who's wouldn't?  Jean asked Susie, “Ok, what did we win?”  Susie replied, "You have just won the $10,000 prize.”

Steve could not help but notice that Jean's jaw dropped.  She quickly filled Steve in on what Suzie just told her. Jean and Steve told me that their hearts were pounding with excitement but they were still skeptical.  “For the next 30 minutes Suzie tried to convince me that this was not a scam,” said Jean.  According to Suzie, 26 skeptical people either hung up on her or did not return her call within the allotted time.  This made the Side's the 27th alternate…winners by default.

Steve and Jean received some forms that had to be notarized and returned to CBS Interactive.  Before doing so, the couple contacted the NY State Police and the Attorney General’s Office.  Both agencies told the couple that they were not aware of any "Survivor Scam.”  Feeling a little more confident, Steve and Jean e-mailed the completed forms to CBS. 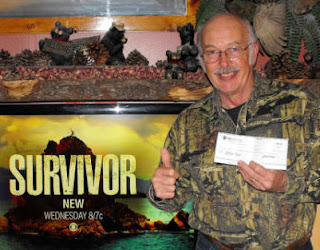 Five days later their $10,000 check arrived via FedEx. Still not 100% believing that this was not a scam, the couple deposited their check.  After some investigation, the bank verified that the check was authentic and had cleared. It was then time for celebration.

Steve and Jean agree that it is truly sad that our society has become so suspicious.  “We keep thinking of the 26 people that could have won, but were too skeptical to listen to Susie.  Normally we hang up on telemarketers, but that day we let Susie talk, maybe we were bored.  The Ides of March was definitely a great day for us.”