"She" Saw Something Nice About You

I was reading an article on Abay.com.  And I thought, how cool is that.  C.F.B. was being recognized by Senator Patty Ritchie.  I will admit that I was jealous and wishing that the Captain had given me first dibs on this story about his special recognition.  But, such is life in the world of blogs, it is a dog eat dog world.  Feel Good stories come and go, sometimes you get lucky and snag one, and other times..... well.... the other guy gets it.


Tonight, my son came down stairs and said "hey dad look what I got at school today".  Of course I said "show me"!  He had two papers in his hands and handed them to me.  Looking at them, my jaw dropped, just a little bit.  So much for my poker face.  What I saw in my hands was identical to the "saw something nice about you and wanted to share" from Senator Patty Ritchie. The same "letter" sent to C.F.B. 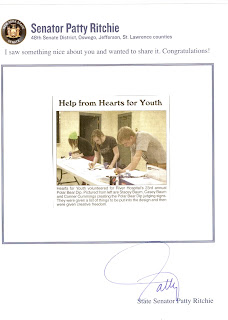 Awkward moment! I found myself explaining to my son how Senator Ritchie was trying to give special recognition to different people in her district.  He said 'but dad, the school office handed out a bunch of these at school today". Geez... apparently Senator Ritchie had someone scouring the local papers and blitzed these special recognition's throughout her district.  Nice gesture on her part, but very poor execution. The large numbers of these letters kind of takes the "special" out of her recognition. Which leaves me a little disappointed. 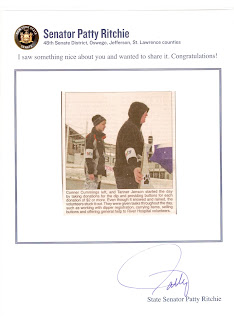