A Note Of Appreciation

Johnny Truesdell's Abay.com and photographer Abay Paparazzi {Dan Gaebel} put a ton of time, effort, and talent into covering this years Polar Bear Dip.  Paparazzi took 1026 photos of the event.  Johnny video taped, edited and uploaded footage from this event as well as making available others videos that he found for you on YouTube.

I could not help but notice a full page ad while skimming through the TI SUN.  The ad was a thank you to all the Dippers, Supporters, and Volunteers who helped raise $59,000 which was just shy of the $60,000 goal. 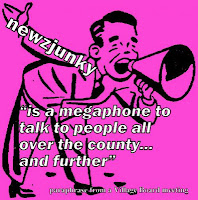 I did not see any mention of thanks to Abay.com  or their fan page on FaceBook for the coverage of this event that was shared on Newzjunky. People are still stuck with the archaic thoughts of what news is [or was] which is referred to as MainStream Media.  MSM is dying a slow death and is being quickly replaced with online news.  I could go on and on about this, but my only purpose was to thank Abay.com and Paparazzi for the coverage of the Polar Bear Dip 2012 and of course to Newzjunky for being a Megaphone to the north country and beyond.


Bloggers Note:
The fund raising event is over and the dip fell short of it's $60,000 goal.  The MSM is not covering the event anymore.  BUT Abay.com unlike MSM is still rich with content from the Polar Bear Dip.  I wonder how much money the Hospital will receive over the next few months because of the Abay.com  event/news Archives?
Posted by jim cummings at 6:10 PM