Homeland Security has been trained in the event that terrorists might commit some act that would stop the flow of traffic on the busy T.I. Bridge.  Little do they know, it does not take a terrorist to interrupt traffic flow.  Today, 2 Canadian Blue Hairs successfully shut down one lane of northbound traffic for almost 10 minutes 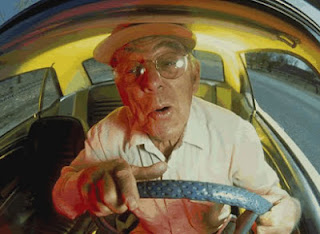 I have noticed lately, that droves  of Canadian Blue Hairs have been migrating north on I81. Returning to their summer nest after wintering in the southern states. I was waiting to pay the toll to cross the T.I. Bridge today when traffic in that lane came to an abrupt halt.  The driver of the Subaru in front of me kept gesturing to the toll taker.  All I could see was his frail hand waving as if confused.  I could hardly see the occupants through the hatchback window. Their heads would just peak over the luggage that was stacked to high.  Traffic was backing up as each minute ticked by.  After several minutes an older couple exited their vehicle.  They both looked confused, the lady seemed to be annoyed with her husband.  The husband opened the hatchback catching a small duffel bag before it hit the pavement.  The wife fished around in the back and pulled her purse out from under a stack of luggage. Evidently the husband broke the rule that every man knows.... a purse stays within arm reach of its owner.  She seemed relieved to have her purse clutched under her arm and they both got back into the car.

I figured that this ordeal was soon to be over with.  The husbands hand extended out of the window and I saw a couple of coins drop into the toll takers hand. Not loonies or toonies but nickels dimes and quarters   The toll taker made a hand signal  as if to say more please. Another minute goes by and a few more coins are deposited into the hand of the taker.  More heads bobbing and swaying, making the car jostle around like a car parked at lovers lane.  The toll takers hand was still extended asking for more coins. I could almost hear the Plink Plink as the last few coins were deposited into the takers hand. Finally, the transaction was complete. Nope, I was wrong, the toll taker gave the husband back a coin or two, evidently the husband over payed by a few cents.  Traffic flow was restored and the couple continued their journey, as did the rest of us.

Bloggers Note:
A True Story, with some artistic license.