The Democrat Committee has nominated the strongest candidates to run on November 3rd.  Take note from the sample ballots below, that the Dems have recruited the best of the best regardless of political pedigree. We have registered Democrats  as well as Republicans running on the Democratic Ticket in both Village of Alexandria Bay and Town of Alexandria races.

I have read all the political endorsements in the TI SUN letters to the editor section as well as the ADs. Some of them were pointless, and redundant using buzz words to describe each candidates personal characteristics or lack there of.....

Bottom line, if you are a registered voter please go out and vote. If you are an absentee ballot voter, please fill it out and mail it in. 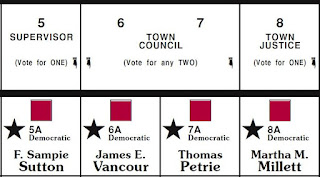 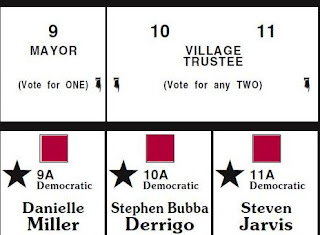 Posted by jim cummings at 12:59 PM No comments:

Armed with only a pool skimming net, I scooped up the chipmunk like a lacrosse player. In one smooth motion I flung the rascal towards the open window, only to hear a hollow thud. I knew I had missed my mark as I watched Alvin ping off the upper window and do a series of slow motion back flips through the air. The furry critter landed on the carpet and took off like a shot towards our Dog Luna......

We grabbed Luna and closed the door behind us. The chipmunk was fast and evasive. I scooted out the door to grab a couple of weapons. A small baseball bat and the pool skimming net will do just fine. I hurried back to the man cave and slid through the door, shutting it behind me.

I guess you could call it Pandemonium, or maybe our version of killing Walkers like they did in the Walking Dead. After 20 minutes of chasing and corralling the critter towards our dog who did not seem to know what to do with it. I began to think that we were never going to get Alvin out of the house.

Conner finally trapped the furry invader pinning him between the net and the carpet. I moved in and aimed my bat.... bonking the little critter into unconsciousness. The invader was dead and Conner scooped him up and flung him out the window.

We put the room back together. I was sweating, the dog was panting, and Conner had a smile on his face. I knew what he was thinking...... and I said to him..... Do Not Tell Mom.

Posted by jim cummings at 2:29 PM No comments:

Otter Creek Nature Trail is another preserve project under the direction of Thousand Islands Land Trust [T.I.L.T.]. I am especially excited about this project because it is literally a stones throw from our front door.

Others should be excited about everything this trail has to offer including an A.D.A. compliant path. I made a video of some of the highlights of this trail. Keep in mind that this is a work in progress scheduled for completion Summer of 2016.


The trail entrance is located on Rt.26 on the outskirts of the Village Of Alexandria Bay.

You can Like Thousand Islands Land Trust on Face Book 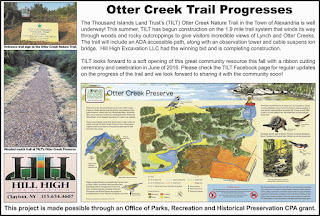 Posted by jim cummings at 4:31 PM No comments: