Town Supervisor Martha Millett announced at the November 9th budget hearing that she wanted to allow more time for the review and extended it until November 17th.  Because of laws governing municipal budget deadlines the hearing had to be held before the 17th.  The audio below is the rescheduled hearing that was held on the 15th.  Town Supervisor Elect Hunneyman wanted to make good on his campaign promise by cutting the Supervisor's Salary and expenses. Supervisor Millett as well as her predecessor have held both positions of Supervisor and Budget Officer.  The Supervisors salary  remains the same at $18,530. The Budget Officers salary was cut by Supervisor Elect Hunneyman from $32,418 to $22,418.  The expense account associated with this position saw a 50% cut and is now at $4,000.  It is unclear whether Hunneyman will follow in his predecessors foot steps and act as both Supervisor and Budget Officer.  The combined salaries would total $40,948. 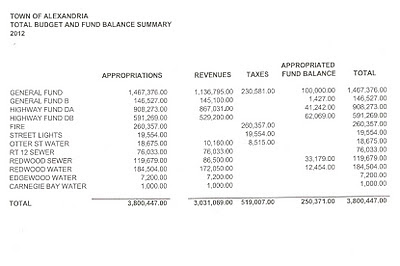