I received the minutes titled "Special Meeting" [Riverwalk Project] that was held on March 31, 2009.  You remember, the meeting that nobody was invited to except the 2 reporters [WDT and TI Sun].  I scanned the minutes and even though it is stamped with Draft, a motion was made last night to accept these minutes. All were in favor and the motion carried.

As you read the minutes, you will notice that the mayor miraculously transforms the "Special Meeting" into an "Emergency Meeting".  How about Panic Meeting, because that is what it was. Moving on........the mayor called the meeting because the Public had some misconceptions regarding the Federal Stimulus money that the VB turned down.  The mayor was worried because we [the Public] were discussing it in the Forums on Abay.com and I was commenting on it here.  The discussion started when ex-Village Trustee R. Drake was interviewed by Rachel Kent from WWNY [Click here for that interview ]. So why were Chris Williams and myself not invited to this meeting?  I could go on about that, but you can draw your own conclusions.

So how much of the St. Lawrence River do you see from the Riverwalk?  The entire length of the Riverwalk, only about 20% of it has a view of the River.  The other 80% you can see the municipal parking lot, the River Hospital and its annex, the new condo's on Sisson, the water treatment plant, the River Hospital [again], the alley by the dive park, the Monticello, the backside of a novelty store, Howell Ave, and a vacant run down building tied up in estate.  Not much bang for the buck! 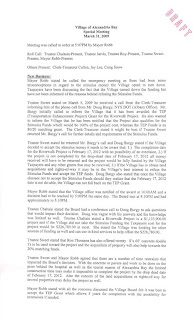