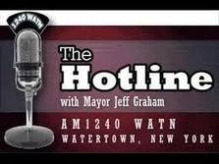 1240 WATN Hotline host Jeff Graham talks about blogs and reporting on the local news 3minutes and 30 seconds into the show.  At about 13 minutes and 33 seconds Jeff talks a call.  You could tell the caller would have rather remained anonymous.  Whatever!  The caller starts out by saying he wants to clarify what went on at that meeting, because he was there.  It is just one mans opinion and that the mayors comments have evolved into the blogs don't want the bikers.  Abay.com and I are not saying that.  Some of the people posting on the other sites are saying maybe the bikers should go else where.  WE are NOT saying that.  We want the BIKERS to stay..... It is SOMEBODY else that needs to go.....  The discussion between Jeff Graham and caller continues until Jeff blows the callers cover and he reveals that it is Ron Thomson.  It is a great discussion and as usual Ron raises some good points.  Listen to it by CLICKING HERE

The version below contains Jeff's conversation with Ron: